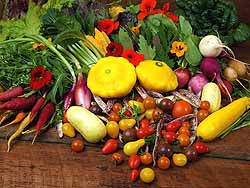 The optimal health of every community member is a primary goal and necessity to thrive in any remote, off-the-grid, and self-sustainable environment. To achieve and maintain this goal, Project TriStar has defined the community diet as exclusive raw vegan with food production and meal preparation designed to support this diet. This means there is no consumption of cooked foods, processed foods, or animal products and byproducts such as meat and dairy.

If you are not currently eating raw vegan foods then this concept may be unfamiliar to you. For some, the questions and comments revolving around a raw vegan diet may include:

To hear answers to these and many other questions about the perceived need for meat and a raw vegan diet, you can watch an interview with Dr. Brian Clement, director of the Hippocrates Institute in Florida. Dr. Clement and the Hippocrates Institute are leaders in the field of eating live food to aide in optimal health, nutrition, and helping the body cure many diseases. 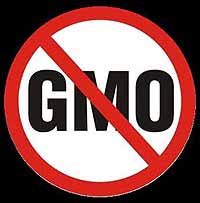 The truth is that the above comments are myths based on a society that has been brainwashed into an unsustainable lifestyle filled with addictive habits to foods with little or no nutritional value. The Project TriStar community has moved past these old patterns or unsustainable paradigms. Project TriStar is about physical healing, being consciously awake, and acceleration of growth and in order to achieve this goal, the body must also be supported and nurtured.

Of course, all fruits and vegetables are produced with the primary objective of organic and chemical free, as well as GMO (Genetically Modified Organism) free. For this reason, Project TriStar has developed an extensive heirloom seed bank and utilizes a variety of growing techniques to ensure a high nutritional and chemical free value of the produce. 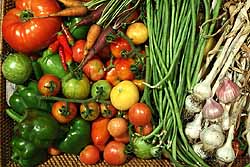 The benefits of a diet consisting of more fruits and vegetables have long been recognized as healthier for human consumption. Even the Harvard School of Public Health writes:

“It's hard to argue with the health benefits of a diet rich in vegetables and fruits: Lower blood pressure; reduced risk of heart disease, stroke, and probably some cancers; lower risk of eye and digestive problems; and a mellowing effect on blood sugar that can help keep appetite in check."

"Most people should aim for at least nine servings (at least 4½ cups) of vegetables and fruits a day, and potatoes don't count. Go for a variety of kinds and colors of produce, to give your body the mix of nutrients it needs.”

Although less recognized, the additional benefits of an organic raw vegan diet mount daily as researchers and doctors complete their studies and examinations of those who have made this transition. In fact, there is a growing trend of health related cures that are being directly linked to the benefits of a raw vegan diet. 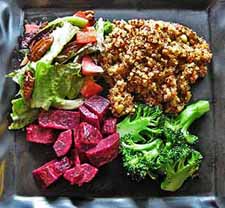 The reality is that there is no diet healthier and more sustainable than that of raw vegan. Some of the more obvious advantages include: reduced energy consumption (no cooking), reduced food consumption (more nutrition, less volume, and less cravings), reduced health related problems and ailments (less acid and chemicals), reduced need for medical treatment and prescriptions (enables the body to heal naturally).

Proven to many who have already made the transition to raw, but less publicized is that some raw vegan diets have been directly linked to the healing of heart conditions, digestive disorders, cancer, diabetes, and hundreds of other ailment. Weight loss couldn’t be easier as there is no longer a need to diet, just change your diet to raw vegan! Basically, without consuming processed foods, trans-fats, and saturated fats, the human body naturally balances hormone and chemical secretions allowing the cells and organs to rest and begin the repair process. This, in turn, allows the body to settle into its ideal weight. 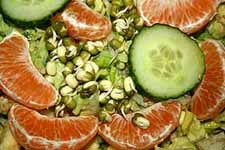 For these and many more reasons, Project TriStar has concluded that an exclusive raw vegan diet is the healthiest form of nutrition for humans, provides the greatest harmonic relationship between the human body and nature, and has the greatest viability for long-term sustainability.

Often the biggest questions for those considering the raw vegan diet and the Project TriStar community are “what kind of food will we be eating?” and “how will it taste?” And hopefully if you are considering these questions, then you have probably already researched and answered the more basic questions of: “how can anyone survive without meat?”, “why is there no livestock in the Project TriStar community?”, and “why a raw vegan diet rather than cooked food?”. 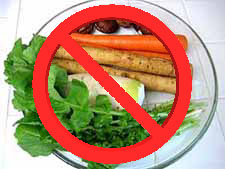 When people think of a raw vegan diet, they often image what might be called "rabbit food" or basically a meal consisting of few leaves of lettuce and some carrots. This perception couldn't be farther from the truth. Project TriStar understands that it only takes knowledge, planning, and little effort to prove the community members with a raw vegan diet that both tastes and looks great. The reality is that most any dish that can be made with conventional and processed foods can also be made with raw foods as well. 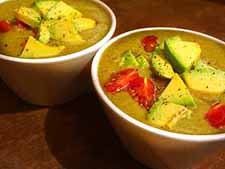 You might then ask, "but what does it taste like?". Answer: In most cases, very similar and sometimes even better that the conventional counterpart. Anyone who has experience with preparing raw vegan cuisine knows that similar tastes can be created in many different ways. Often mixing together completely different raw foods can simulate the taste of something that was either processed or cooked. With the advent of the raw vegan movement, people have been experimenting with how to recreate many of the conventional tastes that we have come to appreciate such as pizza, pasta, soups, and sauces. The results have been astounding and provide the rest of us with recipes that we can now use at our leisure. 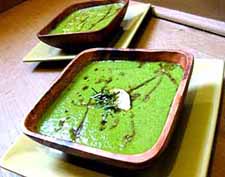 Something unique to the raw vegan diet is called "energy soup". Energy soup is a highly nutritious blend of different leafy raw vegetables with various spices such as basil, garlic, ginger, red pepper, and maybe some salt. The best part is that you can mix and match whatever vegetables you might prefer and even throw is some fruit if you like. Some of the more common vegetables in energy soup might be celery, kale, spinach, bok choy, and any variety of chard. If you've never had it before, the results are one of the easiest, quickest, nutritious, and tasteful raw vegan meals that is nothing less than amazing. 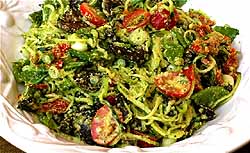 Project TriStar understands the challenges of a raw vegan diet and especially when transitioning from a diet of cooked foods and animal products. Project TriStar also believes that people feel and perform better when they eat foods that are highly nutritious and also taste good. As such, the selection of plant crops is also based on palatability of the plants once they are prepared for community consumption. Everyone knows that some foods are more palatable than others and even the best chef may not be able to change that.

As a community founded on the raw vegan diet and whose members have joined because they believe in this diet, Project TriStar has access to extensive knowledge base in the creation of raw vegan meals and recipes. The Food Services Committee will draw on this vast experience to ensure that plant production and menu items are in harmony with the ability to create nutritious and tasty meals for the community consumption.

Another consideration is to ensure the raw vegan diet includes enough fat and protein. To supply these nutritional requirements, the Project TriStar community has included the production of both nuts and algae (also known as Spirulina and chlorella). The following chart provides a breakdown of the protein and fat content for a variety of nuts, as well as Spirulina. 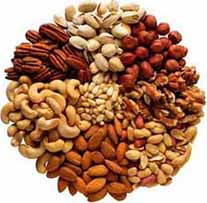 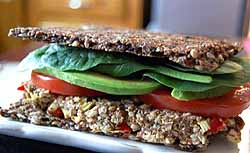 The community raw vegan menu reads like a veritable encyclopedia with knowledge, wisdom, and experience all rolled into one. Menu items include: an infinite variety of energy soups, raw pastas, raw breads and crackers, raw chips, sandwiches, sauces, deserts, and food combination's that challenge and even surpass the taste test with any raw vegan restaurant. 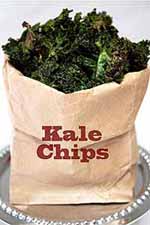 With any community or lifestyle, there is always a need to store some food away for either convenience or a rainy day. In the case of raw vegan food, one of the best ways to prepare food for storage is through dehydration. Such dehydrated foods may be useful when traveling long distances, for emergencies, instant energy boosts, or just for snacks. To accommodate these needs, dehydration of fruits and vegetables is an ongoing activity of the food production operations. 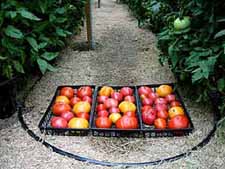 In order to take full advantage of the nutritional value of living raw foods, they are best picked only after they are vine ripened or immediately after they have dropped from the vine. This ensures the produce is in it's most nutritious state for human consumption and has achieved its most palatable taste. As part of the daily harvesting and meal preparation operations, fresh vine ripened fruits and vegetables are picked from the garden and delivered directly to the kitchen. The kitchen staff then creates the community meals based on the days harvest and posts a list of the menu items in the cafeteria dining area. Menu items may change from day-to-day as fruits and vegetables come in and out of season and to provide more variety in the community diet.